No quantum leap towards a car-free city 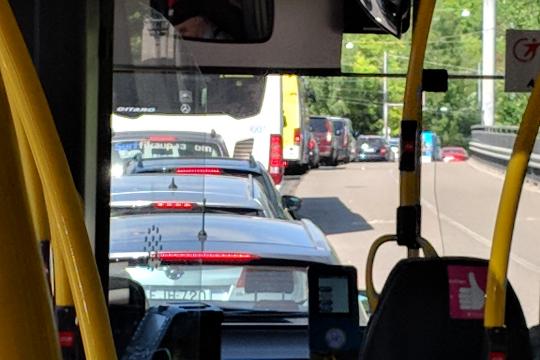 The public transport company of the Finland's capital region (HSL) has moved to a new fare system. The system was previously based on the city borders. This was unjust: A one-kilometre trip cost you more than 4 Euros if it happened to cross a city border while a 20-km trip (e.g. from Lauttasaari to Vuosaari) might have been only 2.2 €. Now the capital region is divided into concentric zones around the city center of Helsinki and the fare is determined which and how many zones you are entering during the trip. The trips are paid with an electronic travel card, which can be loaded with "time" (weekly, monthly or seasonal ticket) or "value" (to pay individual journeys).

Insignificantly cheaper for most, but not all
The implied promise was that the system does not get more expensive, but this is obviously not true for everybody. For those people that use single tickets, the rise is noticeable. The price of a single ticket within the AB zone rose from 2.2€ to 2.8€ which is more than 27%. On the other hand the ticket is now valid for 80 minutes (instead of 60 minutes) and the region that can be travelled with the new ticket has expanded (mostly into the Western direction to Espoo). However these additional improvements are relevant only for a limited number of customers since the bulk amount of journeys stay within 60 minutes and within the Helsinki area of the AB zone. Moreover, the single tram-only tickets have been abolished. These tram tickets were much cheaper then the regular tickets that entitle you to ride any type of public transport. There are several media stories about the loosers of the ticket reform in the Finnish press, e.g. at Talouselämä: https://www.talouselama.fi/uutiset/hsln-lippu-uudistuksen-haviajat-ratik....

Promises
My own public transport expenses have been sharply rising (by about 25%) as I primarily used single tickets within the Helsinki part of the AB zone. This wouldn't be a big issue if HSL had kept its promise to offer a substantial discount on users that keep the auto-renewing subscription ticket valid for a year or longer. However, I cannot even find this promise any more on the HSL website. When I asked the customer support of HSL, they told me that they are working on the implementation of such a discount, but they cannot say when it will be ready. This reminded me of the previous fare system update, when HSL promised to introduce a supplementary ticket for owners of monthly tickets valid within Helsinki in order to extend its range without the need to buy a full-price ticket for the whole greater Helsinki Region ("seutulippu").

No quantum leap towards a car-free city
While overall perhaps a tiny step into the right direction, the fare-system renewal is far from an attractive offer for car drivers to become public transport users. Much more courage and bigger steps are needed if Helsinki seriously wants to make private car ownership pointless by 2025. For families with children living in the C zone, the car is even financially still too competitive compared to public transport (ABC ticket for 2 adults & 2 children for one year: ~3500€).