Cycling to the airport 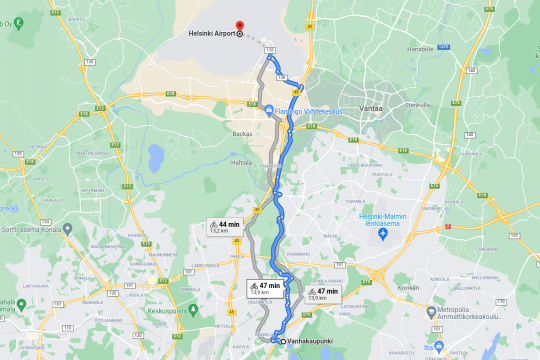 The Helsinki international airport is located about 14 km North of our apartment. Actually, the airport is not located in Helsinki, but in its Northern neighboring city Vantaa. Already on my last conference trip before the pandemic I had decided not to use the taxi, but instead to cycle to the airport. This was easier said than done for two reasons:

1. There is not dedicated parking space for bicycles at the airport. The whole concept of an airport seems to be built on the premise that nobody ever cycles to the airport. I was asking the Finnavia customer service and they suggested the bicycle parking space of the Hotel Hilton Airport.

2. While there are plenty of bicycle roads, the road signs are so infrequent, wrong or missing, that it is impossible to find your way without using the navigation app from your mobile phone. The situation gets worse if you make the trip in the dark which is almost guaranteed since most of the planes leaving to and arriving from continental Europe do so in the early morning or late evening.

However, I have cycled to and from the airport three times by now. Every time I try to find my way without the Google Navigator, and every time I loose my way. One problem with the voice navigation is that the Google navigator cannot pronounce any Finnish road names. Another problem is that Google maps are simply not kept up to date. Due to the constant construction, many of the suggested routes are impossible to ride.
And it's not fun to stop every 500 meters and pull out the phone from my pocket, rip off my gloves in order to use the touch screen, which does not react properly because it is raining cats and dogs.

The problem with missing and wrong road signs on major bicycle roads is apparently wide spread. A similar impossible area to navigate for cyclists is the Helsinki Central Park. If you know Finnish, you can read about it in the daily newspaper Helsingin Sanomat (https://www.hs.fi/kaupunki/art-2000008227424.html). The story is about the futile attempts of a Finnish politician from the Greens Party, who tried to cross the Central Park by bike. Despite millions of Euros being poured into updating the park's road signs, help from the indigenous population is apparently necessary to make it from one side to the other without getting lost.

I always calculate 2 hours for the 14 km ride, which would be enough for me to make it even by foot - provided I do not get lost. I have not found the bicycle parking space of the Hilton Hotel yet. I will have another try next time...