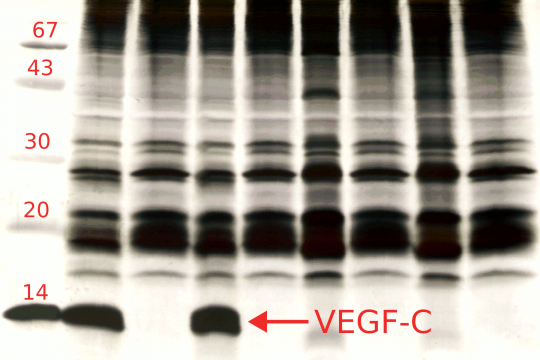 As a matter of fact, I did the first experiments expressing VEGF-C in E. coli in 1999, but never got active protein. In the following 15+ years, we exclusively used eukaryotic cells (yeast, S2/Sf9/Hi5 insect cells, CHO) to produce VEGF-C. We reactivated the "VEGF-C in E. coli" project a few years back and we finally reached our goal last year. However, it was much more work than we originally anticipated. In the beginning, all attempts went South, and to rescue the project, we developed an in-vitro folding protocol. It was perhaps more luck than ability that we stumbled upon a combination of solubility tag and redox-modified E. coli strain that can pull off the trick to produce directly bioactive VEGF-C without the need for an in-vitro folding step. We decided to include also our unsuccessful attempts (CyDisCo and periplasmic expression) in the results section to avoid the file drawer effect.