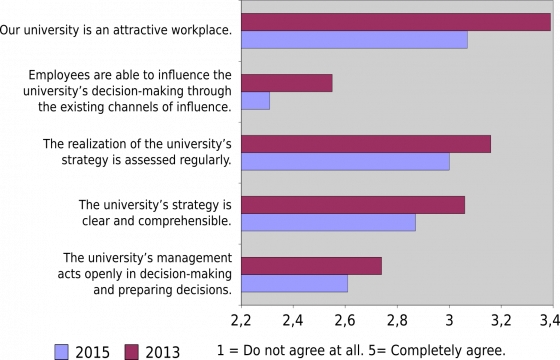 When I started as a principal investigator at the University of Helsinki, I was advised to take the "Good leadership" course which was arranged by Personnel Training. Together with 14 other research group leaders, I learned between November 2013 and March 2014 from Sanna-Marja Heinimo and other experts i.a. the "skills for effectively developing, coaching, empowering and leading others to getting best results".
At the end of the course, we had a dinner with Jukka Kola, who is now credited for implementating the extensive (and according to many observers overboarding) cost savings that were forced upon the university by the budget cuts mandated by the prevailing political powers.

I do not want to discuss here whether such drastic measures were necessary or a less extensive savings strategy would have been sufficient. Even the decision whether to save or to practise deficit spending in an economic downturn is mostly not based on facts but on ideology. In economics, fashion and Zeitgeist are at work in addition to hard data. Therefore, it is not surprising that prominent economists are holding opposing views concerning the effects of deficit spending. But I go off on a tangent here...

I simply wanted to express my total disappointment. Not in the savings themselves, but in the way HOW the savings were implemented in relation to the "good leadership" practises that we have been advised to practise.

The decisions were not sufficiently openly discussed. Still now, the grounds for many lay-offs remain incomprehensible and controversial (see e.g. this article in the major Finnish daily newspaper Helsingin Sanomat). Since transparency was noticeably absent, the talk about good leadership by the top management of the university seemed to have been hardly more than lip service. I do not doubt that they have the best intentions in mind for the greater good of the university. Just who defines the greater good? Most oligarchs define it themselves, don't they?

So it is not surprising that in the recent workplace well-being survey, the satisfaction with the strategic leadership at the university level (rectors and vice-rectors) was at an all-time low. If the polls would be repeated now, the results would likely be much worse, especially if the fired people would still get a voice. Notably, it is not only the average employee of the University of Helsinki, who does not trust the leadership any more. My feeling is that the distrust now pervades researchers at all career stages. What future is possible with such a constellation?

Google is consistently named among the best American companies to work for and they decided to spend millions of dollars and many years to research how to create the best work teams. The single most decisive factor in determining the innovation outcome, creativity and productivity of a team was psychological safety (see this NYT Magazine article). Guess how safe university employees are feeling at the moment.

When we were talking with Jukka Kola, I was very impressed with his clear commitment towards increased internationalization at the University of Helsinki. However, I already wondered back then how realistic the goal to "actively recruit top international staff" is. Now it seems even more unlikely that this goal can be reached to a meaningful degree since universities start to experience a new wave of brain drain. Even at the students' level, where the internationalization has made amazing progress in the last 20 years, we might see a decline with the introduction of tuition fees for non-EU/ETA students.

Strategic plan for the University of Helsinki 2013–2016