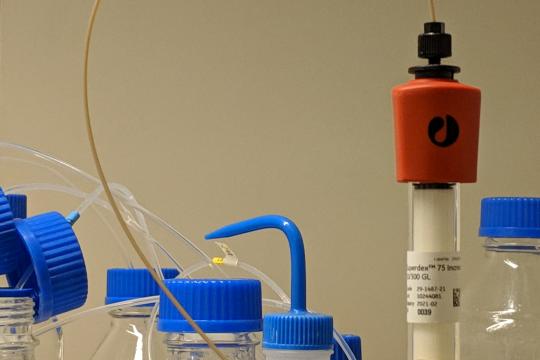 I strongly believe that companies are genuinely interested in getting critical feedback. At the very least, it should be part of their corporate survival instinct. When dissatisfied customers simply switch to an alternative vendor without giving feedback, the damage is already done. That's why I always give feedback if a product does not meet my high-quality expectations.

However, this time I am writing about a product I have been very satisfied with, namely the new GE Healthcare Superdex 75 Increase 10/300 GL. It is a gel filtration column and an iteration of the previous Superdex 75 10/300 GL, which we have been using for the last 30 years. The biggest advantage of the "Increase" is the higher pressure-resistance. A few weeks back an overworked grad student forgot to close the column after use and returned it to the fridge, where the 20% ethanol slowly evaporated over the following 2 weeks. The fridge is ventilated and when I needed the column, the damage was already done: There was a perhaps 8 mm gap and a dry zone of approximately once inch had been developing. I immediately filled up the dead volumes with degassed 20% ethanol and started a very slow run (0.05 ml/min) for several hours, after which is switched to degassed water and then to buffer. After letting it run for about 2 days the gap was reduced to about 3 millimeters. The remaining gap was removed by adjusting with the top adapter (I needed to screw it down as much as possible).

Now I needed to test the "repaired" column. I did both a functional test (separating two proteins in PBS) and the acetone test (injecting 100 µl 2% acetone in water). I was massively surprised when the aceton test showed about 19000 theoretical plates (which is more than we ever got with our old Superdex 75 columns). And the separation of the two proteins (RNaseA and BSA) showed that the column is still fully functional. However, we cannot tolerate any gel compression, since the ability of the adapter to correct for it is maxed out (GE Healthcare used to produce a longer adapter, which would allow us to compensate even further, but they chose to discontinue this product).

Both the grad student and myself were relieved after getting these results because buying a new column would have set us back by 2200€ and since we have no dedicated funding to operate our core facility, I would have been forced to offload this expense to the grad student's laboratory. Unfortunately, I did not take a picture of the damaged column as my instinctive reaction was to immediately start the rescue. However, the column in the picture below is the damaged column after the rescue operation was complete.