Why Finland should take on more debts 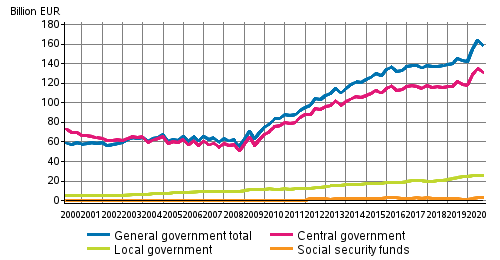 The financial deficit of the state has been rising steadily since the financial crisis of 2007/2008. So it is incomprehensible that the same parties that are responsible for the growing state deficit are now arguing AGAINST taking more debts. The Corona-caused increase in state deficit might be much higher than the increases in previous years, although until Q3/2020 I see no change in the rate increase, yet.

In order to have enough money to keep the country alive through the pandemic, the state SHOULD take on new debt. Anybody arguing against new debts (be it national debts or integrated into a European solution) MUST present a feasible alternative plan. In my opinion, all possible alternatives are much worse than taking on new debts. Comparing the state budget to a private person’s budget is not fair. As a private person, you cannot continuously increase your debts. But a state is not a private person as it has many more financial tools at its disposal than any private person. That is even more true for the EU and the European Central bank.

What alternatives do we have to increasing the state financial deficit?

Inflation
Inflation is already part of the EU strategy to handle the increased debts. This doesn’t reduce the nominal value of the debts, but their real value. In a high inflation environment (NOT hyperinflation, but something like 5%, which was a quite “normal” inflation rate in my home country Germany in the early 1970s, 80s, and 90s), the state can easily reduce its debts. There are two problems with this solution: 1. The European Central Bank has not even managed to reach its 2% inflation target despite trying for many years. 2. In the long run inflation is not a good solution, because it increases the advantage of those who own substantial tangible assets (real estate, shares, precious metals, etc.). If you have the majority of your savings in the stock market, real estate, precious metals or other tangible assets, you do not need to be afraid of inflation. On average, all these things will maintain or even increase their value during times of high inflation. However, those without tangible assets cannot compensate for the inflation. The number of those that need to be supported by the state will rise, thus money will be spent anyway (but just after a delay). Inflation also worsens the wealth gap: The rich get richer. The poor do not always get poorer, but the rich get richer much faster than the poor and thus the income gap is widening. For the same reason, the poor did not profit much from the financial rally at the stock markets which has lasted now for more than 10 consecutive years.

So what are the alternatives to increasing the budget deficit?

Higher taxes
Really? We already have a fairly high level compared to many other countries. But from whom do you want to take? You only can take money from those who have money. A dedicated tax for the rich is a question of definition. Who is rich? 99% of the population would not oppose increasing taxes for the 1% of the population that profited most from the bull market of the last 10 years. There are many more millionaires today in Finland than still 10 years ago. Most of these people have skimmed the cream and it seems appropriate that they would contribute back to a country that has enabled their success. While this sounds very leftist, most people would probably consent, if they only agreed with what the taxpayers’ money is spent on. Close to nobody in this country would oppose investing into the future, into better infrastructure, better schools, research and development, etc. But as long as this remains a pain point, higher taxes can be only a tiny part of the solution.

Reducing spending
This is essentially the same issue as the previous one. Wait, it’s actually even worse because we started from the premise that we need MORE money to get the country through the pandemic. Being too hesitant and not spending enough is considered to be the reason why Europe did not recover as quickly as the US from the 2007/2008 financial meltdown. Unfortunately, there are some signs that the same mistake is about to happen again.

The problem won’t go away by sticking your head into the sand, but it rather will get worse. Austerity policy is the opposite of investing in the future. We have an investment deficit, which has built up in Finland over the last 15 years. We have it in education, in digitalization, in research, and in infrastructure.

At the moment, new debts are the only possibility. Debts are cheap (actually with negative interest rates, the state even wins when taking on more debts). Even Germany got rid of their black-zero policy. Finland should not be Europe’s wrong-way driver. For this reason alone, it would be stupid to be the exception. And - dear Finns Party - it is an illusion that any country can exit the Euro-zone at this moment.

Instead of arguing whether or not to take new loans or lamenting the ever-increasing public deficit, we should discuss how to use the money wisely. We should be using it with the goal to increase the GNP sustainably in the long term.

UPDATE: One day after writing this, the major Finnish daily newspaper Helsingin Sanomat was publishing a story which was discussing very much the same issues: https://www.hs.fi/visio/art-2000007843750.html