The evolution of PDGF/VEGF growth factors 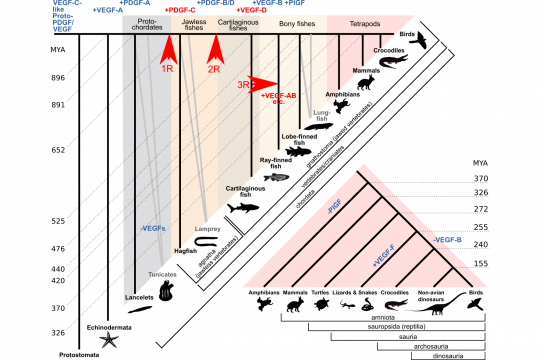 We have uploaded a preprint of our most recent manuscript about the evolution of PDGF/VEGF growth factors to bioRxiv. We comprehensively analyzed the PDGF/VEGF part of the proteome in all animal species for which data is available. We have had some of this data already for a while, but now we enhance it with a detailed look at fishes. The vascular biology of fishes has become even more facinating after the publication of Das et al. earlier this year (read more about this exceptional piece of work).
The remarkable heterogeneity of vascular systems in fishes seems to be supported by a similar extensive heterogeneity at the molecular level. Often, but not always can this genetic heterogeneity be traced back to whole genome duplications. Fishes tolerate full genome duplications better than mammals. At least there have been quite a few such duplications in various branches of the fish phylogenetic tree resulting in polyploid or even tetraploid species. That has resulted in some fish species featuring 4 times as many PDGF/VEGF genes compared to humans, and much more opportunities to diversify the functions of these molecules.

The very first PDGF/VEGF-like molecule appeared likely more than 800 Million years ago during the Precambrian period when marine organisms started to show signs of tissue organization. If we set out to reconstruct this molecule, it would look remarkably similar to a modern VEGF-C. Specifically the C-terminal "silk homology domain" seems to have been invented early on in evolution. In fact, a large number of extant morphologically simple organisms feature such VEGF-C-like molecules still today (e.g. the nematode C. elegans).

Beyond these insights into the evolution of PDGFs and VEGFs, there are some useful take-home messages for vascular biologists: For example, we did not find any functional VEGF-B genes in birds. Similarly, there seem to be no PlGFs in amphibians. Then, on the other hand, the VEGF-Fs - identified from snake venoms - appear to exist more broadly also in non-venomous lizards. This poses some limitations on some animal models (Xenopus, CAM assay), but it would be nice to know what VEGF-F is doing in geckos...

Have a look at the manuscript and please comment or criticize, if you have any thoughts! The idea is to make this manuscript still a bit better before submitting it to a journal for the traditional peer-review.