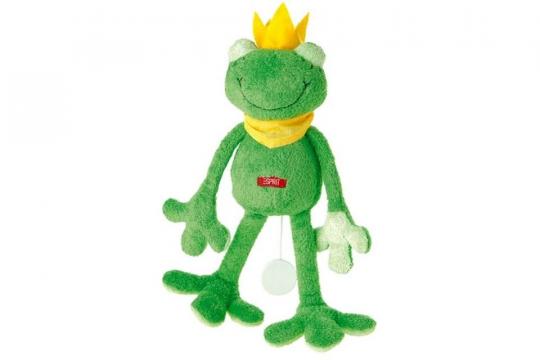 This January our Esprit/Sigikid Frog broke. It's a musical toy to keep our baby occupied during diaper changes. It stopped playing its Schlaf, Kindlein schlaf melody after winding up its mechanism by pulling on the string that comes out of its bottom.

The mechanism has been probably been operated about 300 times. Right from the date of purchase, there has always been a peculiarity with the winding mechanism, notably that when pulling on the retracted string, an initial resistance could be noticed that required very strong pulling to overcome. However, after the initial resistance, the string was easy to pull and we did not pay attention to this anymore after we got accustomed to it. Until the mechanism failed to operate after pulling. That's when we realized that maybe it should not have been all that difficult to start pulling and maybe this was indicative of an initial problem that only manifested itself after sufficient usage.

This frog was by no means cheap. In fact, the Finnish Prisma shop (Viikki branch) took a large margin of profit by selling it for almost 19 Euros while it can be purchased for less than 9€ online (Baby-Markt or 12,97€ at amazon.de). This, the EU directive that regulates such cases of seller liability (Directive 1999/44/EC of the European Parliament and of the Council of 25 May 1999 on certain aspects of the sale of consumer goods and associated guarantees) and the fact that it is a product designed (but not made) in Germany by Sigikid made me reason that I should get it replaced without any trouble after a mere 8 months of use (we really started to use it only after the birth of our daughter in June).

However, what I encountered at the customer desk of Prisma Viikki, was completely different from my expectations. First I was told that this product has a warranty of 6 months and thus I won't get it replaced. Since I insisted on a formal return of the product, the employee filled out the return form for me. I have to mention that the conversation went in Finnish which is not one of my strong languages. And retrospectively I realize, that I should have filled out the form myself (in English) to make my point that the product was most likely defective right from the start.

A few days later I received a phone call where the "you don't get the defective product replaced" was repeated. I mentioned the EU directive which requires 2 years of seller's liability. And since Finland is a member of the EU I should be able to exercise my EU-given rights. The shop representative at the other end of the phone line surprisingly admitted that she does not know of such directive and that she would contact the Finnish customer protection services and come back to me later.

Again a few days later, I had another long phone conversation about the topic where I finally had the opportunity to express the situation in detail in English. Actually it appeared that the Finnish law doesn't have any time limit for seller's liability, but handles every case individually. This could be bad or good for me, depending whether you argue that such a musical toy's expected lifespan is substantially more or less that approximately 11 months. In the end of this conversation the Prisma representative admitted that the situation might be different from what she originally perceived.

Again a few days later I received another call from somebody else who ask me to submit a detailed description of my request in written form, which I did via e-mail yesterday (March 9th). Now I am waiting for a mutually satisfying resolution. I actually think that the mechanical problem is probably minor and had the failure to function occurred a bit later I probably would have "operated on the frog" to fix it myself. This case has already consumed an unreasonable amount of my time and alone for this reason the incident will probably (independent of its outcome) leave me with some uneasy feeling about Prisma's customer care.

Comparing goodwill (is there a closer English translation of the German word "Kulanz") of sellers between Finland and Germany makes most German expatriates here in Finland nostalgic and home-sick. About half of the money I spend, I spend in the exact same Prisma Viikki shop that refused to replace the Esprit/Sigikid frog. Luckily, we live exactly half-way between the Arabia shopping center and Prisma Viikki.