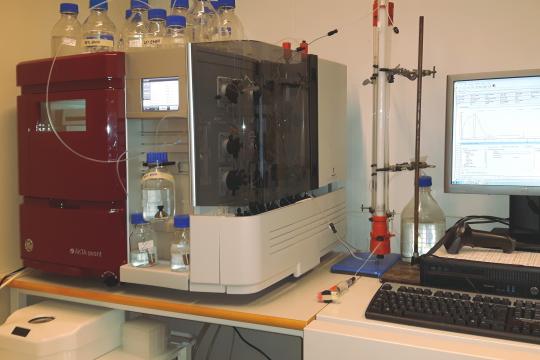 About one year ago, we secured funding in an internal faculty call to replace the old Pharmacia Äkta Explorer 100 FPLC machine of the Protein Production and Purification core facility. The Äkta Explorer had been purchased in 1996(?) when the Swedish brand Pharmacia still existed. In 2014, the worse case scenerio happened and both monochromator and Xenon flash lamp broke almost simultaneously, which left us with a bill of almost 10000€. Hence we wanted to replace the machine with a contemporary model. There are only two companies offering serious devices in this space, which is GE Healthcare (Äkta product line) and BioRad (NGC product line). GE Healthcare inherited the Äkta brand from Pharmacia via multiple mergers, while BioRad is a relatively new contender with their NGC models, which they released only a few years back.

We opted for the Äkta Avant 25. We definitely wanted to have a cased, refrigerated fraction collector. And we wanted to have a familiar user experience. We often run automated purifications and we do not like our proteins to be for longer times at room temperature in open tubes into which bacteria and dust from the air can enter.

By now, we have operated the Äkta Avant for about half a year and we have meanwhile a good idea how it compares to the Äkta Explorer. Even though the Avant is more modern than the Explorer, all users of our core facility still use the Explorer. They are familiar with the user interface of Unicorn 5.11 and seemingly have no interest in learning the - admittedly - more complicated UI of the Avant. But the other reason it was only in internal use so far was the fair amount of problems that we have encountered. With our old Äkta Explorer, we have never seen so many problems in such rapid succession. I don't know whether our situation is typical (according to GE Healthcare's representatives it is not). Nevertheless, here are the issues that we encountered:

1. The hard drive of the controlling computer was failing after a few months of use. This happened during the protein purification course, that we were organizing for the Doctoral Program in Biomedicine. The computer became so slow that it was impossible to control the Avant and the Intel RAID demon was flashing to notify us of the upcoming disaster. Even though we bought the system from GE Healthcare, they delegated the responsibility to the computer manufacturer (HP). It took me a whole day (several e-mails, phone and internet calls) before I finally managed to figure out how to get the hard drive replaced on warranty terms (HP case number 4652993752). The only way was to contact my local (Finnish) HP support via phone. However, once I had done so, it took HP only 17 hours to deliver the new hard drive to my desk. IT support exchanged it and after about 4 hours of rebuilding the RAID, we could start using the Äkta again (Unicorn refused to run while the RAID was rebuilding itself). About a month after this incident HP started to bother me urging to return the faulty hard drive. During my phone conversation I had not been told that I was expected to return the faulty drive. The drive was probably dumped by our IT support, but even if they kept it I do not feel enthusiastic about feeding another request into the support queue of our overworked (and meanwhile largely non-existing) IT department, which has an average length of about 500 requests (resulting in response times of weeks to months depending on the urgency of the issue).

2. Later on the same day we started a method run to purify an Fc-tagged protein via a protein A column. We were loading 400 ml of conditioned cell culture medium to a 5-ml-HiTap rProtein A FF column. We have done this many times before, but this time the pressure in the column was quickly rising and the Äkta reduced dutifully the flow rate not to damage the column. After about 2 hours the flow rate was somewhere around 0.1 ml/ml. Maybe we forgot to clear the sample by centrifugation/filtration and the online filter had become clogged. I tried many things without any improvement and finally I individually removed every element in the flow path to localize the source of the blockage. Finally I identified the FR-902 flow restrictor. In the 20 years of using the Äkta Explorer I have never seen a flow restrictor becoming totally blocked, only an increase in their resistance. The GE service visited us the same week Friday and tried to clean it, but to no avail and we had to wait for a spare which we received the week after.

3. We did continue the run without the flow restrictor, but we were not happy about that since we had been fighting on the Avant with air in the system for many weeks. We have had the air detector going off prematurely when we were loading sample directly to the column. That is also something that we have never seen on the Explorer. First we thought it might be a result of too long or too narrow sample inlet tubings (we kept the samples in a fridge next to the Avant and used an inlet tubing length of about 3 meters). Then we thought that our degassing was not sufficient. However, nothing improved the situation. The problem disappeared after the GE service engineer exchanged the seals of the B pump in a first attempt to fix another problem: the pump seal leakage (see next paragraph).

4. Pump seal leakage into the backwash tubes. The pump rinsing system uses 50-ml Falcon tubes filled with 20% ethanol. If the pump seals are not tight, running buffer escapes into the pump rinsing system. In our case about 5 ml buffer escaped during a 500 ml run of a gel filtration column (at 2.6 ml/min and max. 0.5 MPa pressure). The Falcon tubes started to overflow after a few hours of operation and the pump rinsing solution had to be exchanged daily. The service engineer visited us and exchanged the seals of the B pump, but that did only marginally improve the situation. We did exclusively run either the A or B pump to identify which one was leaking and most of the leakage appeared to be due to the A pump. Via e-mail, we got the suggestion to run 95% ethanol under high pressure for 1 to 2 hours through the A pump to run in the seals. We did that and the leakage was reduced by about 50%. But that was still too much and GE decided to exchange seals and pistons of both A and B pump. The exchange happened last week and since then, we did not notice any leakage at all.

5. There were other strange errors (like sporadic communication errors and some power losses). Some of them might have been caused by cables that were not connected properly during installation (the Avant is unfortunately in such a place where it is difficult to check the connections on its back side). During the last service visit, the service engineer triggered such a power loss and found that the power cable had been plugged in barely sufficiently to make contact and small movements of the device were able to cause power outages.

6. Air detection in the B inlet valve without any obvious source. This is the one that plagues us at the moment after the issues 1 to 5 have been resolved. It started soon after the last service visit. We started to have sporadic alarms due to air detection in the B valve. First we did not pay special attention to them, but now they are constant every 30 minutes or so and we are again investigating: the inlet tubings are filled and no bubbles can be seen; the air alarm is not triggered when drawing from B1, which likely means that the pump itself is ok, but that the issue is in or associated with the B inlet valve. However, since we did not do any changes to the B inlet valve, this seems strange in any case...

Bottom line: If we were today to decide between the Äkta Avant and the BioRad NGC DiscoverTM 100 Pro, I probably would decide in favour of the BioRad device. The amount of additional work that the many problems have cause us is substantial. If measured in lost work hours the costs would add up to many thousands of Euros. Additionally, we were not very pleased with GE's mostly long response times to our support requests. Meanwhile the Äkta Explorer is continuously and happily running every day without anybody taking care of it...

I compare the Avant to a Ferrari, while the Explorer is "just" a work horse. Ferraris might be a joy to drive, but they are more famous for their performance and style then for their build quality. If it wasn't for the Explorer I would have long time ago considered returning the Avant since it has not yet been reliable enough to take into real production use since we received it. I cannot compare with other Avant users (since I personally do not know other Avant users). If it is true what the GE representatives tell me, then there are dozens of Avants in heavy production use without any issues. In that case, we must have received a machine that was assembled by an engineer on a Monday morning after a heavy party weekend. If this is the case GE Healthcare should take full responsibility.

The UNICORN 7 software
The new UNICORN 7 software is better is some, but worse in other respects. We very much miss the option to turn off the UV lamp completely. Exchanging the Xenon flash lamp is expensive (more than 1500 Euros) and since we have long runs (e.g. direct sample loading to the column over night), this will result in a much shorter life time of the Xenon lamp. We needed to exchange the Xenon lamp of the Äkta Explorer 3 times within 20 years. We have roughly calculated that we'll reduce the average life time of the lamp to about 50% (meaning we'll have to exchange it every 3 years) without having the option to switch it off. Alternatively, GE Healthcare could introduce a "long sampling interval mode" for the lamp (e.g. measure the OD just every 10 seconds), which would be more than sufficient for long runs where nothing really happens.

The other major drawback of the new software is the new Evaluation module. The default ("evaluation for dummies") is often, but not always sufficient. It just has the feel of a beta release with lots of bugs and missing features. If you want to do more complicated analysis, you need to go into "classic mode". The classic mode is supposed to be very similar to what the Evaluation module was in UNICORN 5 software. However, they removed some very useful features (e.g. pooling samples is now a pain in the butt, while it was a breeze under UNICORN 5). Nobody really understands why they removed a working feature that almost everybody liked and used and replaced it by a clunky, unintuitive work flow.

Last but not least we have a client software (which is a floating license for the software to observe and control the Avant remotely). First of all the installation of the license is very tricky (in fact, somebody from GE Healthcare had to visit us to get this software installed on my Macbook). Because it is Windows only, we needed to run it under emulation. We used Oracle's free Virtual Box, which does a beautiful job. However, since I meanwhile switched back to Ubuntu, nobody has been using this client license for the last three months. It is just much more simple to use Microsoft's inbuilt Remote Desktop software to access and operate the Avant. Every Windows computer has the software installed and many very good clients are available for free for MacOSX (e.g. Cord) and Linux (e.g. Remmina).