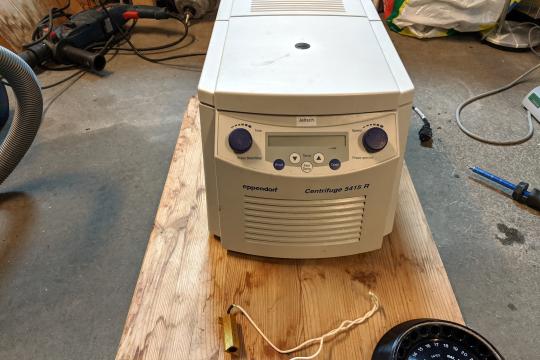 Refrigerated tabletop centrifuges are quite expensive. Although discontinued, a refurbished Eppendorf 5415R (the model we use) still sells for $1-2K. The second of our two Eppendorf 5415R broke already more than a year ago and since then, we have been either centrifuging in the cold room or using the neighboring lab's cold fudge. But having two broken centrifuges of the same type, but different failure symptoms begged to assemble one functioning out of the remains.

One of the centrifuge rotors was stuck (could not be turned even by hand) and the other fuge was giving sparks and smoke when starting a run. I had postponed this repair since I thought it might take much time. However, when I opened the first centrifuge, I immediately could identify the part that I needed to graft from the other fuge. The whole repair lasted less than one hour. There was a blown resistor next to the cooling fan, which was easily replaced with the part from the second fuge. You can see the broken brass-colored resistor (CGS HSA50 resistor, available from Amazon for $13) in the front of the picture left to the rotor.

The failure of both centrifuges was apparently caused by liquid getting into the inner workings of the fuge. The rotor of the second centrifuge could not turn anymore because it was corroded from the salt and water. Also, the resistor had apparently been soaked (it is located immediately below the cooling grill on the top back of the fuge).

The centrifuge works again including the cooling. I do not know for how long we will enjoy it, because it was already 2nd hand when we bought it in 2014. But even if it lasts only for another year, the repair was worth it.

This type of repair might become easier in the future because if I am not mistaken, the EU is planning to mandate that manufacturers make service and repair manuals available to third party repair shops (this mandate exists already for car manufacturers to ensure that independent car repair shops can survivce).

Depending on the coronavirus, I will perhaps get around repairing even more broken lab equipment. Next in the queue is the fraction collector of our old FPLC (GE Healthcare Äkta Explorer Frac-950).