Getting Ubuntu Trusty Tahr onto the CuBox Pro 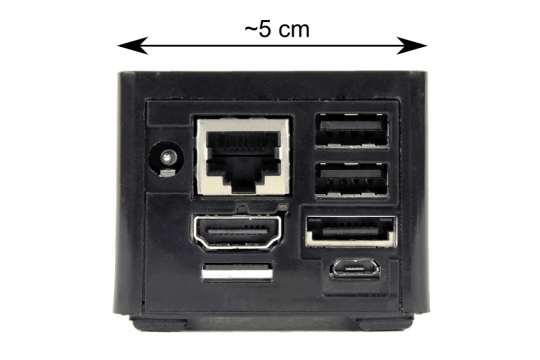 eUPDATE: The Cubox guys have moved the documentation about how to install to the Cubox Pro. If you need Trusty Tahr for your Cubox Pro, you can download a 4GB image: https://drive.google.com/open?id=1CgbSfy17-UrWZwBjZtZpHYTkPgw0MXFq. You just need to write it to an SD card (using dd) in order to get your system going. If you have a larger SD card, never mind: just dd the image to the SD card and then use gparted or something similar to expand the second partiton (the root partition) to fill the entire SD card. Password/login: cuboxpro/cuboxpro. SSH is enabled, so you should be able to login remotely. It's the desktop version, so you can also connect an HDMI cable and login via the GUI. There is still a youtube video (https://www.youtube.com/watch?v=XfLJAchNu2c) on how to use the original cubox installer (http://download.solid-run.com/pub/solidrun/cubox/installer/), but the latest version of Ubuntu that you can install with that method seems to be 13.10 at the moment of this writing.

I have been buying a CuBox: perhaps the world's smallest desktop computer. Both at work and at home I need to replace an old, loud LAMP server with something modern. I don't even need a GUI, I am happy to run the server headless. Neither do I need much much speed.

The CuBox seems like a great idea: No noise, little power consumption, no space requirements and a decent performance. However, getting it to work was far from trivial. It is definitely not an end user toy, but aimed at the tinckerer.

The first difficulty was buying the box. The producer didn't sell it directly at the time (now they do) and the only company that sold it to Finland was UK-based NewIT. Because on the producers homepage they only present their newest models (the "CuBox-i" models), I wasn't even aware of how many different models they had released. I actually bought the CuBox Pro (but I didn't know about it, because there is also the "CuBox-i4Pro", which is the one I rather should have bought. Israel-based SolidRun could do definitely a better job with their web pages. They seem to have a rapid product cycle and drop quickly all links to their "older" products from their main page. This is irresponsible especially since these products are still sold.

I bought the device shortly before Ubuntu 14.04 LTS (Trusty Tahr) was released with the intention to install the server version on this device. I bought it with the 4GB SD card with the preinstalled ancient Ubuntu 10.04 (Oneiric Ozelot). I connected it via HDMI to our (not full HD) TV screen and at least the first boot succeeded and the desktop appeared usable, although not snappy. But what the heck, I want to use it as a sever.

So the first thing I tried to do was to upgrade to 14.04. I was sure that this would work because the community is stepping in where CuBox fails. Namely by providing ready-to-go disk images to flash to the SD card. I tried Arch Linux, Debian and an early Ubuntu 14.04 release. However, when I inserted the SD card after flashing, the CuBox did not want to boot.

Because the Oneiric image (which came on the 4GB card with the device) worked, I flashed it back from a backup (which I had made using dd). Again, Oneric booted up fine. I started to upgrade the distribution to 12.04, which worked somehow, but I lost the graphics display (which I didn't care about). But then the upgrade from 12.04 to 14.04 failed completely. And I definitely want the 14.04, because I want to set it up and forget about it for the next 5 years.

However, none of the images provided (by CuBox or the community) wanted to boot (I don't even want a GUI, I am fine with a command line access as I want to use it as a server). I have tried flashing them from Windows and Linux, but it didn't make a difference. What could the reason have been? The partitions on the card are mounted automatically without error when I insert the card to my Ubuntu 14.04 laptop. I finally googled the Model number "CBP-300-P" which is printed on a sticker on the bottom of the cube. I had started to suspect that it is not me, but some incompatibility or broken hardware. I came across this irc conversation and I realised that I had been pulling the OS images from the CuBox-i wiki pages, whereas my model was a CuBox Pro.

The relevant forum is here and the instructions do work. The instructions are not for the faint of heart, but also not overly difficult. You need a HDMI connection to a full HD screen (1920x1080). If you have less than that, you need to connect to the serial console using a mini-USB cable from another computer and use a terminal emulator as they explain here. The suggested Putty did refuse to make a connection to ttyS0 (from Ubuntu 14.04), but I managed with minicom. However, there was no color coding, but it worked also without.

Because you are running the whole OS from the SD card, you might want to limit memory swapping and do a few other changes to prolong the life of the memory card, essentially the same as is done for SSD drives.