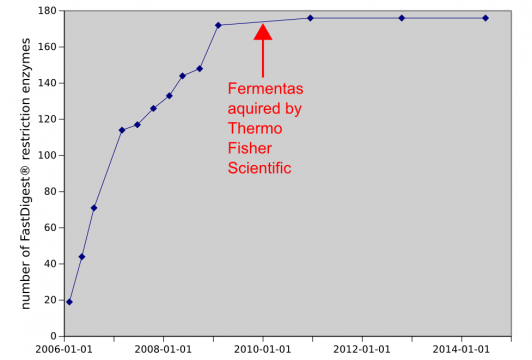 Speed and simplicity
FastDigest enzymes offer two new attractive features: Increased speed and one universal buffer. These features cannot be taken for granted: Typically, most labs stock a range of different buffers for their restriction enzymes. And more often than not, a researcher wants to use simultaneously two different restriction enzymes that are incompatible in their buffer requirements. Often, restriction digests are performed for several hours or overnight and shortening this time to 5 minutes is definitely a big win.

Mixing FastDigest and traditional restriction enzymes in double digests
Why don't I want to use them? Because there is no information about their compatibility with traditional restriction enzymes. Initially, Fermentas stated on their web pages, that "The FastDigest™ buffer is suitable for double digestions with both FastDigest™ enzymes and regular restriction enzymes" (http://www.fermentas.com/techinfo/re/fastdigest.htm, March 15, 2006; according to the Internet Archive). However, this claim has disappeared since, and it is difficult to imagine, that all traditional enzymes would work in one universal buffer given that some have very specific reaction conditions.

The end of innovation: missing restriction enzymes might never be transformed into their FastDigest version
But why would buffer incompatibility be a problem? If you exclusively used FastDigest enzymes, than you never would have compatibility problems! Unfortunately, this does not work because many enzymes are not available in a FastDigest format. And they probably never will become available in that format since Fermentas apparently has ceased to develop the FastDigest portfolio in 2010, when they were aquired by Thermo Fisher Scientific (see the graph above). Thermo Fisher Scientific still sells 191 conventional restriction enzymes and hence this dichotomy is here to stay.

Thermo's FastDigest buffer is probably very similar to NEB's CutSmart buffer
For the time being, I just decided to stop buying FastDigest enzymes. Luckily, Thermo Fisher Scientific has competition with New England Biolab's High Fidelity restriction enzymes. They also feature reduced digestion times, a universal buffer (the "CutSmart" buffer) and reduced star activity. Unlike Thermo Fisher Scientific, NEB does not keep its customers in the dark about their CutSmart buffer composition: it has the same composition as the old NEBuffer 4, except that the DTT is missing and that BSA is already included. Given that the NEBuffer 4 was the default buffer for about 2/3 of all conventional NEB restriction enzymes, it made sense to choose a universal buffer similar to NEBuffer 4 and tailor the HF enzymes to this buffer. I assume that Fermentas did the same about 10 years ago and the FastDigest buffer is probably very similar to NEB's CutSmart buffer...

UPDATE (July 1st, 2014)
I have contacted Thermo Scientific and asked for more information. In fact, internally they do have more compatibility data than they offer via their web site. They provided me with the data for those FastDigest enzymes that we use (see attached PDF file). It is strange that they do not make this data public via their website. I guess they would only profit from making it publicly available. It removes the entry barrier to start using FastDigest enzymes for those labs that use conventional enzymes...