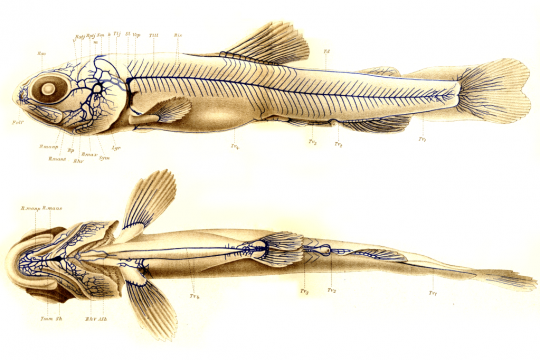 While mammals, birds, reptiles and amphibia are quite easily defined animal classes, there is no animal class "fishes". Different ways exist to classify "fishes", but at least three animal classes are needed to accommodate the living "fishes": cartilaginous fishes, ray-finned bony fishes and lobe-finned fishes. Almost all research on the lymphatic system of fishes had been done on teleost fishes (one of three infraclasses of the ray-finned bony fishes). Teleostei comprise most of the living fishes including the mostly studied zebrafish (Danio rerio). So everything that follows is about this infraclass (and hence might not apply to sharks and sturgeons to name just two non-teleost fishes).

Older publications leave no doubt about the existence of a lymphatic system in teleostei. In 1981, the "secondary vascular system" (SVS) was described in teleost fish by Vogel (Vogel WOP, Claviez M: Vascular specialization in fish, but no evidence for lymphatics. Z Naturforsch 36c:490–492), and it seemed to be identical to what had been described as the lymphatic system before. Because the fluid in this system did not appear to originate from the interstitium, it was considered not to be a lymphatic system.

In 2006, with publications from Brant Weinstein and Stefan Schulte-Merker, it became clear that there is indeed a real lymphatic system in zebrafish in terms of the genetic origin and molecular identity. A controversial reply by Vogel to the newer research on lymphatics in zebrafish was published in 2010. Perhaps the real issue was that most publications on zebrafish lymphatics had entirely ignored even to mention the issue of the SVS: it feels worse to be ignored than to be wrong.

Recent studies in larger teleost fish confirm the existence of the SVS and the arterial origin of its plasma content. The authors of theses studies seem to equate it with the lymphatic system of Danio rerio as described in the last decade. However, the people who do research on zebrafish lymphatics have been very cautious when I asked them: Does zebrafish have a SVS separate from the lymphatic system or is the lymphatic system identical to what has been named SVS before?

Vogel proposes to stick with the traditional nomenclature which defined the lymphatic system anatomically "as vessels without arterial inflow, connected to the venous system" (Vogel WOP. Zebrafish and lymphangiogenesis: a reply. Anat Sci Int [Internet]. 2010; 85(2):118–9. However, if the SVS and the lymphatic systems of teleostei appear to be one and the same thing based on the molecular markers and genetic origin, it would be confusing to use two different names. After all, we all also accept that the genetic code and not functional or visual similarity is used these days to classify organisms. A sperm cell is still a human cell even if it looks like a choanoflagellate (a unicellular animal with a flagellum).

I read many of the older publications about the lymphatic system in teleost fish and other non-mammalian animals when I prepared for the defence of my PhD thesis. It was of advantage to know German as much of the pre-WW2 literature is written in German. I copied many of the historic articles and I thought it would be a good idea to make them available Here are the first four, more will follow later.