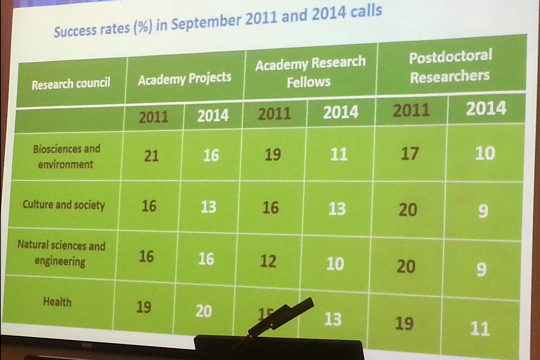 Getting a research position funded by the Academy of Finland is becoming increasingly difficult. What worries me most is the fact that the savings are concentrated at the "lower" end of the academic career ladder: The success rate of applications for the postdoctoral researcher positions has been deteriorating most while Academy projects' funding remained largely untouched in the Research Council for Health. This Tuesday, the Academy presented these numbers at the Ask & Apply event for this September's funding call at the Medical Faculty. Academy Research Fellow funding was also stripped down, but much less than the postdoctoral researcher funding. Strangely enough, the slide omits the success rate of applications for Academy professor positions. Is this indicative of a generation conflict, where established researchers are successfully trying to secure the dwindling resources for themselves? I would need to know the application success rate for the Academy Professors and the granted amounts in order to draw any conclusions.