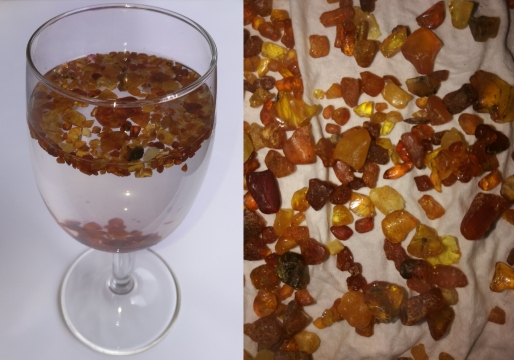 While running at the Baltic beach close to Kąty Rybackie (Poland), I picked up some amber. Some of it didn't pass the floating test (in 20% w/v NaCl in water at room temperature), but I have not clue what the non-floating stones actually are (they are too soft for glass, maybe plastic?).

I did not know when I arrived here for a one-week beach holiday, that the small village we were staying in belonged to the municipality of Stutthof, where one of the Nazi concentration camps was located. Actually, I twice made a detour from my daily morning runs at the beach to have a look at the camp, which is nowadays a museum. Interestingly, children below the age of 12 are not allowed to visit the site. This is different from those memorial sites of concentration camps in Germany that I know: the decision whether to take children for a visit is left to the parents.

Another notable memory from these holidays were the road trips, which made me reconsider my firmly held opinion, that most car drivers in here in Finland are driving irresponsibly and mostly too fast. As a matter of fact, it was almost impossible to drive within speed limits in Poland as nobody seems to do so. I realized that traveling in a speed-limit-abiding car would be more dangerous than traveling in a recklessly speeding one as it would be subject to constant overtaking maneuvers on narrow country roads. Hence, I was also speeding. Not surprisingly, Poland features the highest traffic mortality rates in Europe (https://www.economist.com/blogs/easternapproaches/2013/06/polish-driving). The Polish government's claimed intention is to reduce the numbers, but instead of lowering the speed limits, they increased them in 2011. According to Wikipedia the maximally allowed speed on highways changed from 130 to 140 km/h and on dual carriageways from 110 to 120 km/h. A rough estimate (based on these numbers) shows that approximately as many people have died on Polish roads in the last 20 years as were killed by the Nazis in Stutthof in the years 1939-1945. Maybe the Polish police should start enforcing the limits?