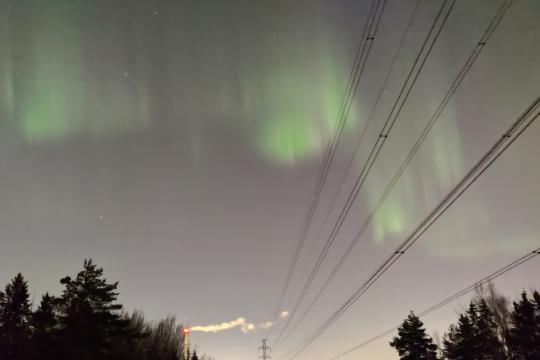 Northern lights seem to be normal these days in Helsinki, Finland. The frequency and visibility of the Northern lights are directly correlated with the 11-year solar cycle. It has been known for many hundreds of year that the number of sunspots waxes and wanes in a cyclic fashion with an average time of about 11 years.

Even though we are far from the maximum of the solar cycle (which is predicted to be sometime between 2023 and 2026), the number of observable Northern lights in Helsinki seems to be increasing. Maybe the Solar Cycle 25 Prediction Panel was not entirely correct in predicting that cycle 25 would be similar to cycle 24. So far, the number of sunspots is well above the predictions. Cycle 24 was by the way the weakest cycle since cycle 14 (which peaked in 1906).

An unpleasant and dangerous side effect of a strong solar activity is a coronal mass ejection (CMEs). A CME happens when the sun spits out large amounts of sun plasma (hundreds to thousands of billion tons). Such ejections happen during the peak of the solar cycle a couple of times per day, but during the solar minimum once every couple of days. Because these CMEs are directional, most of them more or less miss our earth. The magnitude of coronal mass ejections (CME) and thus the intensity and visibility of the Northern lights at lower latitudes is not dependent on the solar cycle, but the frequency of such events is.

A big CME can become problematic because it can interfere with our electric grid. A couple of smaller grid outages have already occurred over recent years (e.g. in Denmark and in Canada) as a consequence of smaller CMEs. It is assumed that a big enough CME might be able to take down the electric grid of most of the planet. During the period 2010-2020 (encompassing much of the weak solar cycle 24) the probability of a large CME had been estimated by scientists to be around 12% (https://agupubs.onlinelibrary.wiley.com/doi/full/10.1029/2011SW000734).
The last big CME happened in 1859, and it is known as the Carrington event after the astronomer who first detected it. During the Carrington Event, the "Northern lights" could be seen as far south as Colombia (8° North of the equator; https://arxiv.org/abs/1508.06365).

Our problem is not that all electronic devices will stop working when a Carrington-size solar storm hits the earth. Rather a few important but difficult to replace pieces of infrastructure will be knocked out. This might initiate the falling of dominoes eventually reaching every aspect of our life. If the CME is big enough, Covid-19 will appear to have been a walk in the park. Even small solar storms can sometimes cause trouble: The same solar storm that caused the Northern lights seen in the image (from Thursday 10th of February) knocked out 40 of the 49 most recently launched SpaceX satellites for good.