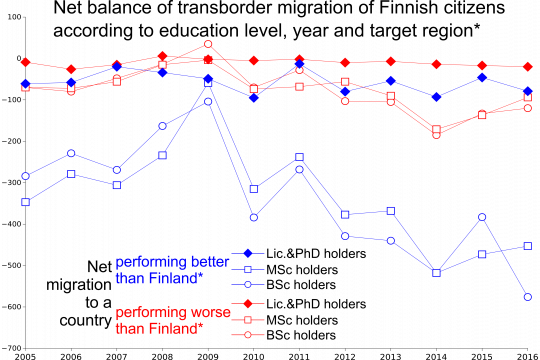 Finland is educating its citizens to a very high level, but is not able to keep this highly educated work force in the country. The net balance of university degree holder migration has been negative throughout the last decade and the trend is worsening, especially at the Bachelor's and Master's level. At the highest level, the interpretation is not very straightforward, since this group contains Licentiate* holders, PhDs, postdocs as well as professors. However, the negative trend is also stable, but not accelerating as fast as at the lower education levels. In this group the brain drain occurs selectively to the best countries with just 5 top countries absorbing 66% of the most highly educated migrants (USA, Great Britain, Switzerland, Germany and Sweden), while the lower degree holders are not as selective (52% of MSc and 41% of BSc holders migrate to the same top countries). Unfortunately, this statistic only reports the migration of Finnish citizens. In order to get a complete picture, one would need the same data for the migration of non-Finnish citizens.

*Licentiate is a degree specific to Finland and a several other countries, which is somewhere between a MSc and a PhD. In Finland, it has been decreasing in importance over the years since there is no equivalent in many other countries.