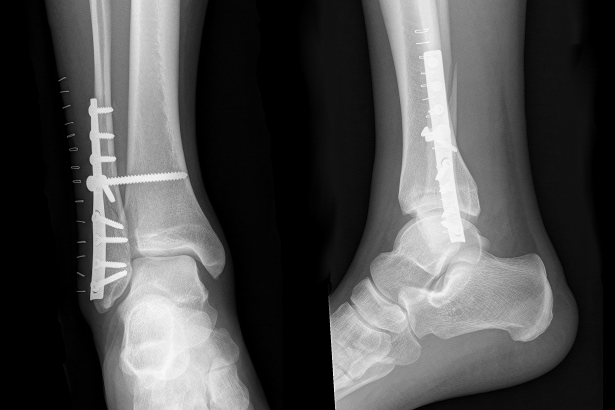 I broke my distal calf-bone (fibula) in a bicycle accident. The street must have still been icy in the afternoon or maybe it was the wet leaves. It happened on the way home, so it is technically a work accident according to Finnish law. Nevertheless, it allowed me another peek into the local public health care system. I just was discharged today from Töölö hospital after spending there four nights in a mixed 6-bed room.

Surprisingly little pain
As long as keep my leg up, the pain is so profoundly absent that I skipped the last day's pain medication completely after consulting with the doctor. I wanted to feel at least a little bit of pain. How else was I to know, that I should go easy on my leg?

Keeping healthcare costs down
The first night I was in a two bed-room together with a bothersoom roommate, who didn't even stop talking after I had clearly communicated that I wanted to sleep; that was around midnight. Then he repeatedly verbally attacked the nurses and later barricaded himself in the toilet. When the security guards came to resolve the situation I was first hurried out of the room to the corridor and later into the 6-bed room. It goes without saying that I didn't sleep much. This is how Finland keeps its health care costs down: The facility is overcrowded and the nurses overworked. I was actually suprised how well they managed considering the circumstances and patients like my room mate. They were always very friendly and helpful.

Surgery
Maybe and hopefully the health care cost savings have not yet reached the expertise of the personnel. I don't mind sleeping in a 6-bed room for four nights as long as the surgery is performed according to the standard of care. Surgery was necessary, because although the fracture was not displaced, it was sufficiently angulated to result in suboptimal healing when treated without operation (just by casting). The surgery was not performed under general, but instead spinal anaesthesia. The surgery went well, but healing will take its time, but so far everything is looking good. I got 6 weeks of sickness leave.

Hospital food
The hospital food confirmed to its reputation: I had so profound constipation on day four, that I thought my hemorrhoids would burst and the sutures rip when I was trying to pop out my poo. The fresh veggies and fruits were mostly a few thin alibi slices of cucumber or tomato. No wonder there was too little fibre.

The biggest loosers: Helsinki University Helpdesk and Tele Finland
The biggest letdown during the hospital stay was Helsinki University computing helpdesk and my mobile phone provider Tele Finland: I had several experiments going on in the lab and in order to give instructions how to proceed I needed to connect to my desktop computer at work via ssh (and nomachine via ssh). I did not manage to get the VPN working form Android. The detailed instruction link on the University help page was (as usual) broken. But even if it wasn't, I guess nobody bothered so far putting up instructions for an OS, that has as little installations as 500+ Million worldwide.

Helsinki University uses OpenVPN and there is an official OpenVPN client for Android. However, when I mailed the helpdesk, they didn't even read my mail. They said I could get to my files via the VPN web interface. This is of course only true if one uses the networked folder on a Windows machine to store ones files. My second e-mail, where I clearly point out again, that I need ssh access to my desktop computer from Android is unanswered to this date.

In order to circumvent this problem, I tried tethering using my Android phone (Samsung Galaxy S3) and my Lenovo convertible S10-3t (dual-boot Windows 7 and Ubuntu 12.04). And tethering didn't work. I contacted Tele Finland to ask whether this is due to policy or whether there is just a bug somewhere. No answer until this date. So I presume its policy. Tethering has been working beautifully with my old HTC Desire (using CyanogenMod 7.1) and Saunalahti. I tried to update my Galaxy S3 from 4.04 to 4.1, but this process requires an online Windows machine (which I couldn't get because thethering didn't work).