One firewall to block them all 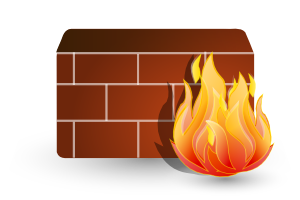 Helsinki University's firewall prevents employees from working
While I was lying in hospital with a broken calf-bone I couldn't get any work done because of the Helsinki University's firewall. Even if the Android OpenVPN client would have allowed me in, I wouldn't have been able to work. The purpose of a VPN is to allow remote clients the same access to the LAN resources as those machines, that are physically located in the LAN. Obviously Helsinki University doesn't think so and doesn't give VPN clients equal privileges. In my case it meant that I cannot ssh into my work computer. This makes remote work expensive, because it required my boss to buy a laptop for me just because the firewall between HY-VPN clients and local machines blocks ssh connections. Without this restriction I could do all the work from my 400€ tablet using e.g. nomachine Player).

The work-arounds failed also
If I had managed to login into one of the University's UNIX servers (myntti, kruuna, klaava or ruuvi), I could have logged into my work computer from there. However, my Android ssh client ConnectBot was not able to ssh into them. I presume this to be the fault of my mobile phone network provider Tele Finland, because I couldn't log into my own ssh servers either (which I normally can, when my Android is connected via WLAN). Once I can connect via ssh to my work computer, I can establish a reverse ssh tunnel and use X Windows or the NoMachine Player to do all the work I usually can when sitting in the laboratory in front of my work computer

Plex and no end of video playback trouble
However, I couldn't get the OpenVPN configuration right on Android and neither could the helpdesk support to this date. So I was totally bored in the hospital and since we use Plex at home as our media center, I decided to watch some movies. However, Plex is still after four years development in beta and we had our fair share of trouble with media playback. Also this time: I couldn't play back a single movie or a single song using the Android client. It made the connection to our (Ubuntu 10.04) plexmediaserver without problems, but the only thing that worked was the "Photos" section. By trial and error, I found out that a part of the problem was, that the videos were in Apple's QuickTime format (they had been encoded on a Mac). So I was looking for a way to batch-convert hundreds of files from .mov into .avi. Certainly this would be faster than filing a bug report and waiting that the Plex guys fix the problem. QuickTime is anyway dead, isn't it? ffmpeg was certainly the way to go, but Google flooded me with hits concerning batch conversion and the problem was finding the one that works. There is unfortunately lots of crap and noise on the web. The following one-liner did work: