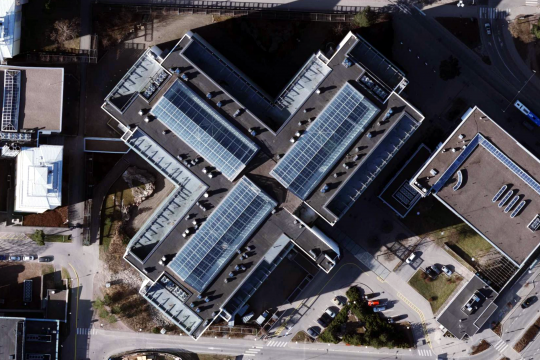 Meet the rectors at Meilahti
Last Thursday (18.10.2018), the new rector of Helsinki University Jari Niemelä and the four vice-rectors (Sari Lindblom, Paula Eerola, Hanna Snellman, Tom Böhling) visited the Meilahti campus for an open question and answer event. Hardly any foreigners were present during the event. Consequently, the language of communication was Finnish. Obviously, foreigners won't participate if they do not understand and speak the language of the event. And since foreigner's don't participate, there is no reason to change the language of the event, and so the circle continues...

Traditionally Finnish and Swedish only
The Meilahti campus holds a special position when it comes to language use since until very recently, it was impossible to receive a degree from Meilahti without knowing Finnish or Swedish since the only degree programs were not offered in English. However, the situation has been changing (e.g. with the move of the Psychology Department to Meilahti and the establishment of new degree programs like TRANSMED), but old habits die hard.

Trailblazers RPU and HiLIFE
The trailblazers for internationalization at the Meilahti campus are the Research Programs Unit and HiLIFE. The postgraduate students and postdocs of the Research Programs Unit (RPU) and the HiLIFE recruitments are the two most internationalized parts of the Meilahti campus and consequently, Hannu Sariola (previous vice dean for research at Meilahti) and Tomi Mäkelä (the HiLIFE director) brought up the topic of internationalization pointing out that the rules of the university allow for more language flexibility than is actually implemented. To date, the only official languages at the University of Helsinki are Finnish and Swedish, although more English-speaking than Swedish-speaking students are enrolled. English is also the de-facto language of almost all scientific endeavors. Balancing the domestic languages with English likely has no perfect solution. If the university wants to optimize its international impact and success, the role of Finnish and Swedish inevitable has to decline unless massively more resources become available.

Separate events?
In order to engage the foreign staff as well, the dean of the faculty recently organized the faculty staff meeting twice: once in English and once in Finnish. I am not sure whether such separation is a long-term good idea, but it addresses the issue pragmatically and gets the job done. If someone suggested separating the faculty X-mas party according to language, that would be considered discriminatory, but for a working meeting, nobody seems to object...

PS:
I am not the only one who is aware that internationalization has a long way to go. There is a nice article on the Helsinki University intranet portraying the new vice rector Hanna Snellman and her take on the issue: https://flamma.helsinki.fi/en/HY377022. However, the university keeps most of its interesting web content behind locked doors (inside their Flamma service), inaccessible to the general public, who is paying the university's bills... What does the university fear? More transparency?