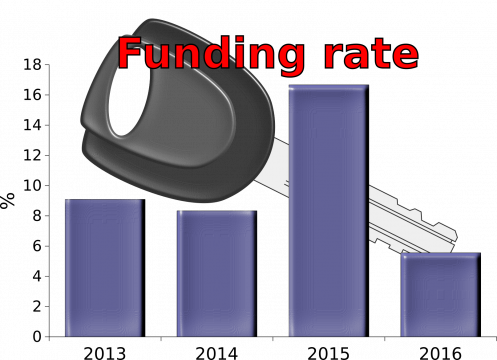 This post is inspired by our recent success in the Key Project Funding call of the Academy of Finland.

One of the main time killers for scientists is to apply for money to finance their research. Scientists spend more and more time preparing grant applications because of the growing competition for the shrinking resources.

After deducting the time for teaching and administration, they maybe able to spend a few hours each week doing research. Last week over lunch, a friend of mine ask me what our funding rates were. I did not know, because I have been avoiding the inconvenient truth. I calculated today and the depressing result is that they are in the low single digit range and this seems to be a quite average figure (for us, 2015 was an exceptionally successful year and the 2016 number might perhaps still improve since several decisions have not been made yet).

Improving academical productivity by increasing the 1600 hours of yearly working time on paper is meaningless if 400 hours of this time are spent in vain, i.e. for unsuccessful grant applications. The financial damage and opportunity costs to the system are enormous and a colleague of my recently pointed me to this 2015 article in Clinical Chemistry, where the monetary value wasted by grant application writing was conservatively estimated for the US to be at least $20 billion per year.

Our budget includes new positions for researchers, but we don't know yet where and when these people will be able to start their work. In theory, the hosting organization (i.e. the Research Program of the University of Helsinki) guarantees the infrastructure. However, the Research Program cannot generate lab space from nothing. The university is just trying to save money by minimizing the floor space it rents. While some people celebrate successful grant applications, my view is more down-to earth: After the grant decision is before the grant decision*.

*Citation modified after Sepp Herberger, coach of 1954 soccer world cup winner Germany, who famously stated "After the game is before the game.”