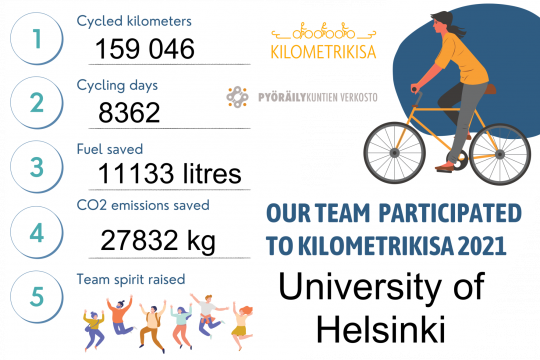 Kilometrikisa ("kilometre competition") is a cycling competition for workplaces, which aims to encourage bicycle commuting and cycling in general. Team members record their daily cycled distance on the website https://www.kilometrikisa.fi and the team with the most kilometers wins. Additional prizes are raffled between all participants (I actually for the first time got lucky this year and won a free massage at UniSport).

There is a summer competition, running from May to September, and a winter competition ("talvikilometrikisa"), running mostly throughout January and February. Do not ask me why there are no spring and autumn events. I have been riding throughout all year for the last decade, with the exception of winter 2012/2013, because I broke my leg when cycling home from work. For me, October, November and December as as good cycling months as January and February. Actually they are better because due to global warming they tend to be snow-free in the recent years. If you commute early in the morning, before the snowplough has removed 30 cm of fresh snow, you know that you will get stuck many times, even with the 57-622 Schwalbe Ice Spiker Pro tires.

My performance in this competition has collapsed since my lab moved from Biomedicum in Meilahti to the Biocenter 2 in Viikki, because my commute has shrunk from 14 km/day down to a meager 4.5 km/day. I still score very high on the list when it comes to the number of cycling days (109 for the last season), but according to the cycled distance, I am just slightly above average (place 58 with 1031 km). Our team ("Helsingin Yliopisto", University of Helsinki) placed 143th this year in the competition for big workplaces.

I am always wondering whether the total amount of cycled kilometres and the number of participants are increasing over the years, which should be the case if we are serious about combatting global warming. The first kilometrikisa event was held in 2014, so there is enough data to see trends. Unfortunately, the website does not give this information. It would be possible to scrape it and calculate it from the individual results, but I have enough other things to do atm. Maybe sometime in the future.