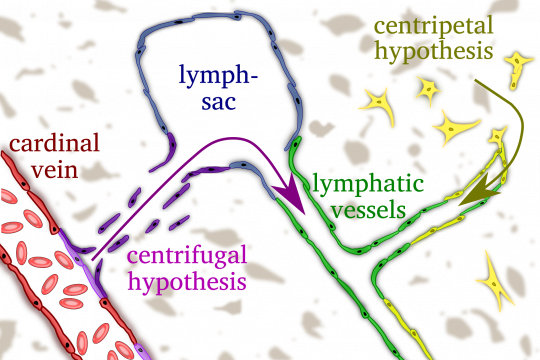 Since the beginning of last century, researchers have been arguing about the embryonic origin of the lymphatic system. Some claimed that it is in its entirety an outgrowth from blood vessels (so-called centrifugal hypothesis with Florence Sabin and Louis-Antoine Ranvier as early proponents, this mechanism of growth is called "lymphangiogenesis"). Others maintained the view that the lymph vessels do form newly from precursor cells in the mesenchyme (so-called centripetal hypothesis with George Huntington and Charles McClure as early proponents, this mechanism is called "lymphvasculogenesis"). This controversy has been going on for more than a century and several published studies within the last years show, that the truth lies somewhere in between both views. Such synthesis had been proposed already in 1932 by van der Jagt. Kenny Mattonet and myself wrote a short update on the topic and you can read the English version or the German original.