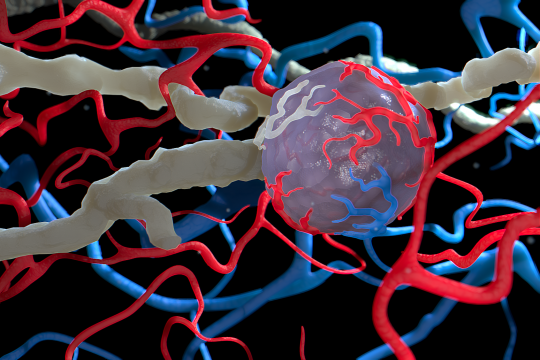 The 3. Swiss Lymphsymposium took place on September 4th in Zürich. It is sponsored by Juzo, a producer of garments for complex physical decongestive therapy (CPDT), which is the main therapeutic option for lymphedema therapy. CDT cannot heal but it keeps the symptoms under control. I really liked the talk by Prof. Erich Brenner, since it nicely addressed the issue of blind-ended "lymphatic capillaries", which, with some exceptions, do probably rarely exist in the steady-state adult human anatomy. I had discussed this previously with others such as Johannes Grünzig (https://doi.org/10.1016/j.aanat.2018.08.004), who specifically looked at the shape of the initial lymphatics in the eye. I was asking Erich where the concept of blind-ended capillaries originates from and it seems to have its origins in early drawings from German physiologists. As a matter of fact, I myself have been perpetuating the blind-ended initial lymphatics in my schematic drawings, e.g. here, without paying much attention to the issue. As a defense, I can argue that the low magnification shows only the larger collectors and the high magnification suffers from the narrow depth of field. In fact, the depth of field can indeed give sometimes the impression of blind endings, while in reality, the vessel might simply make a turn. However, I have also seen convincing images with blind-ended initial lymphatics. From a functional perspective, which geometry would be the better choice? I guess nature is good at optimizing structures...

Of course many of us molecular scientists have seen real blind-ended lymphatics. Obviously, during development and other situations of lymphatic expansion (wound healing, VEGF-C application), such lymphatic blind-ended sprouts do exist. We often also look at lymphatics in places where such finger-like structures do de-facto persist throughout adulthood (i.e. in the villi of the digestive tract). However, here the constant high supply of VEGF-C is likely involved in maintaining these unusual structures (https://doi.org/10.15252/emmm.201505731).

In my talk, I was addressing the current status of therapeutic lymphangiogenesis. Using VEGF-C, we can induce the growth of new lymphatic structures, but the current gene therapy (Lymfactin) is only able to deliver a short burst of VEGF-C because the delivery vector (an adenovirus) is rapidly inactivated by the immune system. Hence, the clinical studies were well chosen: to jump-start the integration of lymph node transplants into the local lymphatic network. But given this relatively narrow indication, the business decision by Herantis Pharma to focus on its neurodegenerative pipeline and to discontinue the Lymfactin development is even understandable. IMHO, we would need molecular nudging in order to make an impact in most human lymphedema conditions, which are - for the most part - chronic. A low-level, distributed stimulation of lymphatic collector contraction would need to be combined with a higher capacity network. VEGF-C could do the trick, but at this moment, we do not have any technology that could reliably deliver such a molecular nudge for a long time, although there are many ideas on how one could pull this off.

The Ketoprofen/Bestatin trials have shown, that there is a big difference between acute and chronic lymphedema. The mouse lymphedema, which was treated surprisingly effectively with ketoprofen, is very different from human chronic lymphedema. One thing we certainly need is better animal models for chronic lymphedema. Interestingly, chronic lymphedema is a common problem in horses.
This seems to be an old hat for those familiar with horses, but for me this was new: The same conservative standard treatment is used for horse and human lymphedema: complex physical decongestion therapy. I was just surprised that there are enough equine patients in order for some researchers and practitioners to specialize in the lymphedema treatment for horses: https://www.equicrown.de or https://horsephysio.at/uber-uns.html
From a scientific point of view, this type of edema is likely much more similar to human lymphedema than all the mouse models that we have: it's a big animal with high hydrostatic pressure in the legs and it's a chronic condition. I am wondering what are the molecular causes for horse lymphedema, and whether this problem was caused by domestication/breeding, i.e. whether wild horses/zebras have also lymphedema? I would love to talk to somebody who knows something about this!

Thanks to Sonja Eham & Dr. Michael Oberlin for the additional info concerning horse lymphedema, and Sonja Eham & Dace Zanker for an impeccable organization. I guess I should immediately start to clone horse VEGF-C...