The battle between the big publishers and the scientific community 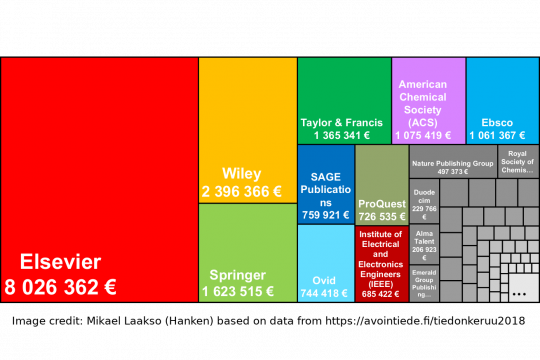 I participated in last week's Townhall discussion Mikä on avoimen tiedon hinta? ("What's the price to access knowledge?"), which was precipitated by the recent discontinuation of Finnish universities' access to journals published by the Tyler & Francis group. Mikael Laakso introduced the audience to the open access issue and the problems of rising prices, and Arja Tuuliniemi reported about the ongoing negotiations with Tyler & Francis and the Wiley group.

While publishers like to portrait themselves as the researcher's friend and ally, fact is that most of the scientific publishing industry is owned by big multinational stock market-listed corporations, which primarily answer to their share holders and researchers needs play a secondary role in the best case. While one would think that electronic publishing is driving down the prices of publishing and accessing published material, the reality shows exactly the opposite.

In the current situation, where many Finnish universities are struggling with shrinking budgets, these millions of Euros could be spend better and the FinElib consortium is constantly trying to negotiate fair deals with publishing giants like Elsevier, Springer, Tyler & Francis, Wiley and SAGE. If the negotiations do not yield results before the old agreements expire, Finnish universities are sometimes cut of from access to some journals. This has happened now again (after a similar crisis in 2016). At the beginning of February this year journals published by the Taylor & Francis group have been inaccessible for Finnish researchers.

Plans S (i.e. the initiative of the European Research Council to mandate open access for all state-funded research by 2020) is certainly strengthening the negotiation position of the FinElib consortium, because all European customers are essentially lining up their requests according to the Plan S requirements. However, it is still unclear how Plan S will affect smaller, not-for-profit publishers like scientific societies (https://scholarlykitchen.sspnet.org/2018/12/06/why-society-and-not-for-p...).

My personal opinion is that there is no reason to panic. A similar shutdown of Elsevier access happened at the beginning of this year (2019) at all Max-Planck-Institutes and and seems to be tolerated by scientists quite well. Even though I might not be able to instantly access all content, this situation should be rather viewed as an opportunity. You can still access all the content that you need (perhaps with extremely rare exceptions).

When you are chasing a nonfree article, you may ask yourself: Why on earth did these scientists publish in the first place in a journal that is behind a paywall? In some scientific disciplines, many of the good journals are not open source... While this is the old chicken-and-egg problem, publishing behind paywalls includes the risk of not being read. It is always touted that open access articles are more often cited than articles behind paywalls, but I still believe that journal reputation (i.e. the dreaded Impact Factor) is more important than being open, and open trumps closed only when the IF is comparable. If you have the possibility to selectively choose whom to cite (e.g. when writing a review), you would always opt for the open publication unless there were very obvious reasons not to do so and the same policy makes sense as well for publishing.