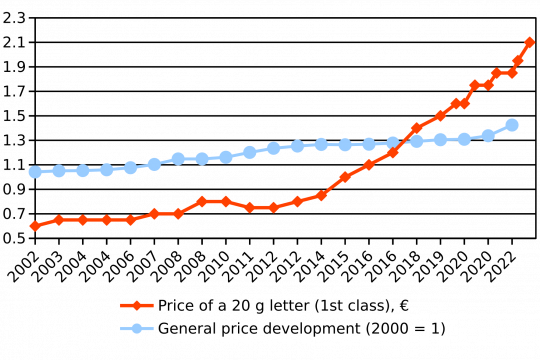 The Finnish Postal Service ("posti") justifies the sharp rises in letter postage prices with the sharp decline in letter volume. On the other hand, the volume of parcels has been compensating for the decline in the letter business. Notwithstanding their lucrative parcel business, Posti has also kept increasing prices for parcels. Unfortunately, equally neat statistics for parcel prices are impossible to assemble because Posti has constantly been changing the pricing structure. If you ask me, they also did this to obscure the price increase. With the last increase (19.04.2022), they, e.g., lowered the maximally allowed weight for parcels. Other previous changes include the maximum parcel dimensions and buying from the post office (versus the web), which has become significantly more expensive.
The above graph shows the prices for the so-called "ikimerkki". The ikimerkki is a stamp that pays for a regular letter up to a weight of 20g. This stamp has no fixed value but pays for the service also after future price increases. The pricing structure has also been changed a few times for letters, but much less so than for parcels. The last significant change was in 2017 when the postal service abolished the difference between priority and economy transport for domestic letters (the above statistics were assembled using the pre-2017 prices for priority letters).