Growing tomatoes on a balcony in Finland 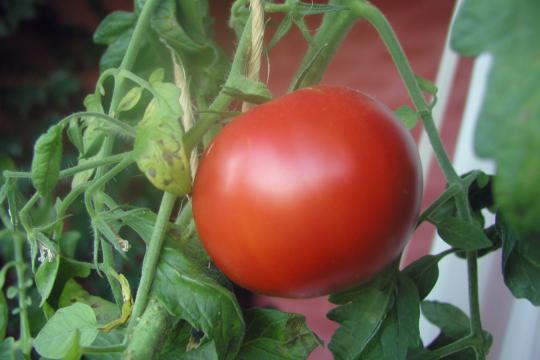 We live in Helsinki, Finland. Helsinki is something like 60° North and the climate is anything but favorable for anything except mushrooms, blueberries and reindeer lichen. But our apartment has a glassed balcony facing South and so I thought it should be possible to grow some veggies there. I seeded tomatoes inside in mid-April, which is a time when the temperatures can easily fall below 0°C and also snow storms are not unheard of during this time of the year.
Not enough light
That was too early as there was still not enough light and rank growth was the consequence: very thin, fragile and tall plants trying to reach more light. I don't think it is very ecological to use artificial light, but it would have helped in this case. The other mistake was that the pots we used were much too small. We used 2 and 5 liter pots, harboring each 2 plants. Next time we'll only use one plant per 10 liter pot. However, when the temperatures went up in the middle of May, we transferred the tomato plants to the balcony. Because now there was plenty of light they grew very fast and soon there were lots of yellow flowers.

Pollination troubles
However, there were no tomatoes. It appears that tomatoes need either insects or wind for pollination, none of which we had on our glassed balcony. To replace the wind one can shake the plants to release the pollen. Once we did that and opened the glass windows they promptly developed fruits. The tomato species was of the indeterminate type - meaning that it kept constantly growing and producing flowers. We had to support them with strings attached to the balcony ceiling. The one thing that was most laborious was the watering and fertilization. Since the plants had very little soil, they needed to be watered daily and fertilized twice a week with a dilute fertilizer. In addition we had to put the balcony blinds into use during the sunny hours of the summer days to prevent the plants from frying. Lots of work for a few tomatoes. I agree with Wise Bread that growing your own fruits and veggies is more of a hobby than a way to save money.

Superior taste
Admittedly, the tomatoes from our balcony taste better then those from the grocery store; my four year old son said today he only eats self-grown tomatoes. Especially in the Northern part of Western Europe, many people have never tasted really good tomatoes. The deprecatory name for a tomato that has no taste whatsoever is (in German language) "Hollandtomate". I guess the lack of taste is due to the optimal conditions they are grown in, maybe also the specific strain. E.g. in order to develop full flavor, tomatoes need also dry periods. Dry periods, however, result in smaller fruits. And because commercial producers are paid by the kilogram their tomatoes never see any dry periods. Taste is much more difficult to measure than weight. The lack of flavor is probably not due to artificial fertilizer (as I suspected before). We used artificial fertilizer and the result was still superior to everything commercial I have tasted this year.

Yield
I harvested alltogether more than 70 tomatoes (about 7 kg) from the plants. The harvest started quite late (in the beginning of August) and lasted until mid-October, when I picked all tomatoes including the green ones to prevent them from freezing. All green tomatoes finally ripened inside and a few managed to rotten. The last own tomatoes we ate in the end of November. Even those that ripened after picking had a much better taste than the stuff from our supermarket.