KLK3: tumorigenic or not? 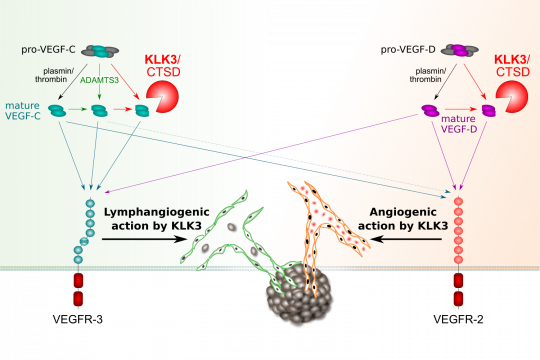 We have just published our latest review about the role of KLK3 as an activator of VEGF-C and VEGF-D in prostate cancer. Prostate cancer is one of the most common cancers in males. It is not a question whether you will get it but only when. Once you reach your 80s, the likelihood of you having prostate cancer is bigger than not having it. In a 2013 autopsy study of Japanese males, who died of other causes, 59% of those older than 80 had prostate cancer. It is likely that many of these cases were indolent, and never would have caused any problems. Only a few of them might have become synptomatic had these men lived longer.

So there is a significant interest in distinguishing those cancers that are going to cause problems. Many prognostic markers have been proposed to do exactly that: to predict which cancers would become problematic.

From the vascular biology point of view, angiogenesis and lymphangiogenesis are two hallmarks of cancers that have been previously proposed to have prognostic value. When we stumbled upon the fact that prostate specific antigen (PSA, also known as KLK3) is able to activate VEGF-C and VEGF-D, we thought that this might have significance for prostate cancer. Meanwhile, further research has clarified some questions and it really seems to be that both VEGF-C and VEGF-D are involved in cancer progression. it is not clear yet which proteases are responsible for the activation of VEGF-C and VEGF-D in real human cancers. KLK3- or Cathepsin D (CTSD)-activated VEGF-D might be one behind the resistance of tumors to bevacizumab (Avastin) treatment. The consequences of VEGF-C activation, on the other hand, are more difficult to predict, because actiavted VEGF-C does simulataneously both good and bad: It facilitates metastasis, but on the other hand allows for a enhanced immune response against the tumor. Interesting research lies ahead. Read more in our review: https://doi.org/10.3390/ijms222413545