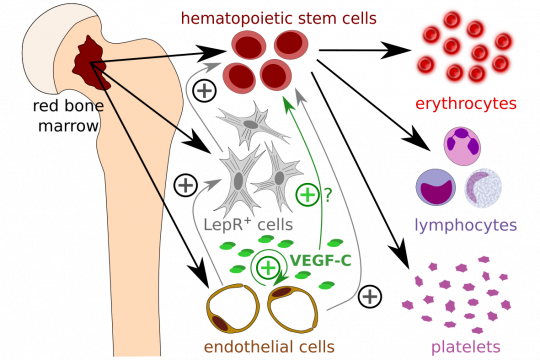 Vascular endothelial growth factor-C (VEGF-C) has been originally described as the primary growth factor for the lymphatic system. And not surprisingly, a constitutive inactivation of both VEGF-C gene alleles in mice is lethal.
However, over the years, researchers have uncovered additional functions of VEGF-C.

In 2016, it was shown that VEGF-C is necessary for the production of red blood cells (erythropoiesis) in the fetal liver. During embryonic development, the production site of red blood cells shifts twice: First from the yolk sac to the liver (in humans between the 3. and 4. month) and then, three months later, from the liver to the bone marrow, where it stays for the rest of the life. Vegfc appeared essential for the mobilization, maturation, and enucleation of primitive erythroblasts. When Vegfc was deleted on embryonic day 7.5 (E7.5), the liver colonization by erythro-myeloid progenitors and the macrophage/erythroid expansion was defective (https://doi.org/10.1182/blood-2015-12-687970).

Some, but not all of the effect was due to the VEGF-C that was produced by the hematopoietic cells themselves, which is not surprising since several blood cells are known to produce or contain VEGF-C (e.g. macrophages, platelets).

In the 2016 paper, adult hematopoiesis appeared unaffected when VEGF-C was deleted in 8 week old mice. Also when erythropoiesis was upregulated by phenylhydrazine (PHZ)-stimulated anemia or when the bone marrow hematopoiesis was abrogated with fluorouracil (5-FU), no major changes had been seen. However, in the new paper, we show that VEGF-C does play an important role in the bone marrow recovery from radiation damage, and that it also is able to pro-actively protect the bone marrow when administered before the radiation damage occurs. The effect was partly due to bone marrow endothelial cells and LepR+ stromal cells, which, when stimulated with VEGF-C, produced factors favorable for the regeneration of hematopoietic stem cells (https://doi.org/10.1182/blood.2020005699). However, the effect on LepR+ cells was likely indirect as they do not express receptors of VEGF-C. Considering that previous data show expression of VEGFR-2 on hematopoietic stem cells (https://doi.org/10.1038/nature00821), and avian VEGFR-2 and-3 during in developmental endothelial/hematopoietic differentiation (https://www.pnas.org/content/94/10/5141 and http://dev.biologists.org/content/125/4/743), also a direct effect of VEGF-C cannot imho be excluded although it was not analyzed.