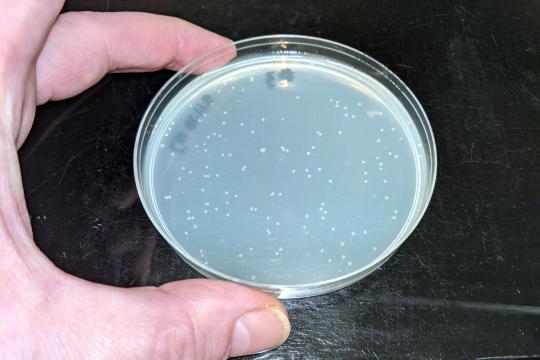 If you need to modify your DNA construct, one frequently used method is the PCR-based mutagenesis, where you incorporate the mutation into the middle of two complementary primers. Alternatively, you can use a primer tag for longer insertions. Then you simply amplify the whole construct by PCR.

This works reasonable well for constructs smaller than ~10kb. There are several commercial kits available for this purpose that differ in the details. Among them are the QuickChange kit from Agilent and the Q5 SDM kit from NEB and the Phusion Site-Directed Mutagenesis kit from ThermoFisher. The QuikChange kit is the most expensive (also because you always buy it together with competent cells) and the NEB kit is rather on the budget side (168€ for me here in Finland). Most of the kits are sized for 10 reactions. But what do you do if you want to do only one or two mutagenesis reaction. Do you buy the whole kit? I faced this question two weeks back. I went to our enzyme freezer and realized that we have T4 DNA ligase, Polynucleotide kinase (PNK) and Phusion polymerase. That is all what you need to make your own site-directed mutagenesis kit!

I followed the Q5 SDM protocol. I used 25 ng template, 17 cycles and Phusion polymerase (with HF buffer) instead of the Q5 enzyme. My template was about 5500 bp long and I used two different sets of primers to make two different mutations (one 6-bp-insertion and one 21-bp-insertion).
In both of the primers, the insertion part is simply attached as a tag to the 5'-end of one of the primers.

The kinase, ligase and template destruction reaction was done for 2 hours at room temperature, after which I transformed self-made competent E.coli (with a competency less than 1 Mio. cfu/µg pUC19 DNA).

For the control reaction, I replaced the PNK and Ligase by 50% glycerol. I wanted to know how much template would survive the DpnI digest.

According to my calculations and depending on how you have bought the individual enzymes, this method costs between 10-20% of the kit price for each individual mutagenesis reaction (about 3€/reaction in my case).