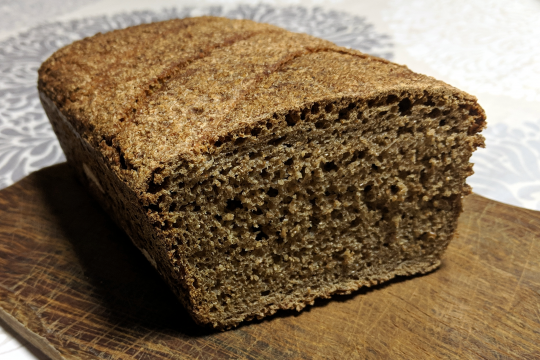 Traditional Finish bread is made from rye and sourdough. This requires expertise, especially when you follow the "purist" approach and only use whole rye flour, water, salt, and sourdough. Most rye bread that is produced for commercial sale has not been baked by these purist rules. Different from rye, wheat is much less problematic when it comes to baking. However, the reputation of wheat has recently suffered due its high gluten content. This is mostly unjustified because a high gluten content of wheat was one of the major goals of hundreds of years of breeding. Not only is gluten a protein (and therefore important in a grain-heavy diet), but wheat gluten is especially gluey and thus maintains the structure of the bread.

I have some 30 years experience with baking wholegrain wheat bread using yeast as raising agent. But last week, I did challenge myself with preparing a sourdough bread. Not yet rye, but wheat sourdough. I prepared the sourdough myself. I added some yeast and yogurt at the beginning hoping that they would keep the bad bacteria away until the good microorganisms have settled in.

Although we own an electric grinding mill, I mostly have bought flour for my baking so far because I find the price for wheat grains unacceptable (>2.5€/kg). Luckily I have finally found a farm, that is directly selling wheat grain for a very competitive price and that is (almost) reachable by public transport from Helsinki: Krannin Tila.

The result of my experiment was not bad. Even my biggest critics - my kids - did eat the bread (however only when it was oven-fresh). Its taste reminds me more of rye bread than of wheat bread. I guess it is more important how you bake the bread than whether rye or wheat is used.

And here is the recipe: