Resistance to streptomycin and spectinomycin 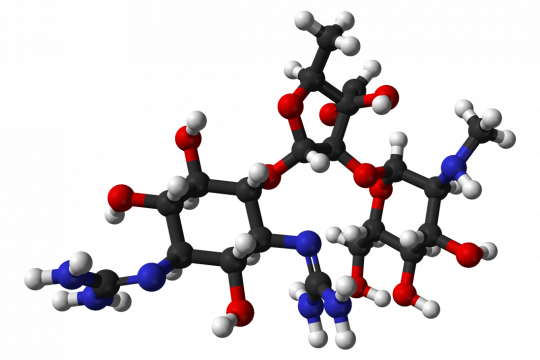 Many cDNA clones from the ORFeome gene collection come in a pENTR223.1 plasmid*. To grow these clones most people use spectinomycin because that’s what the antibiotic resistance gene is called in the maps on the ORFeome collaboration and what the protocol requires.
However, a thorough look at the literature shows, that the same selection marker should work equally well with streptomycin. Well, what’s the difference? Mainly the price: While 5 grams of spectinomycin from Sigma cost 112.7€ here in Finland (Sigma 85555-5G), the same amount of streptomycin is only 17,80€, more than 6 times cheaper (Sigma S6501-5G).

To experimentally test, whether pENTR223.1 confirms resistance to both antibiotics, I grew an insert-containing pENTR223.1 plasmid in 100µg/ml spectinomycin and 100µg/ml streptomycin and it grew well under both conditions, whereas the untransformed parental E.coli strain (NEB5-alpha) did not grow in either. However, the differences are not always clear-cut when you look at different concentrations of these antibiotics. Streptomycin/spectinomycin inactivating aminoglycoside adenylyltransferases have preferred, but not exclusive substrate specificities. this means that some resistance to a low concentration of streptomycin can be conferred by the aminoglycoside adenylyltransferase that targets primarily spectinomycin (or vice versa). However, in practise, some of them are exclusive enough to justify to classify them as either SmR or SpnR. If you need to know, you can always try it out…

The other thing I learned while doing this is that the negative selection marker ccdB DOES NOT work in XL1 Blue, while it does work in NEB5-alpha. Apparently, ccdB does not work in DH5alpha and JM109 either (what’s the difference between DH5alpha and NEB5alpha?).

* pENTR-223.1 is also called pDONR-223.1 or pENTR223.1-Sfi due the two SfiI sites flanking the insert. People tend to call the plasmid pDONR before the insertion of the cDNA and pENTR if the plasmid contains the cDNA. However, this usage pattern is not ubiquitous. Upon insertion of the insert (using the Gateway BP reaction) the pDONR223.1 vector looses the ccdB and chlR/CmR selection markers and the resulting backbone is referred to mostly as pENTR223.1.