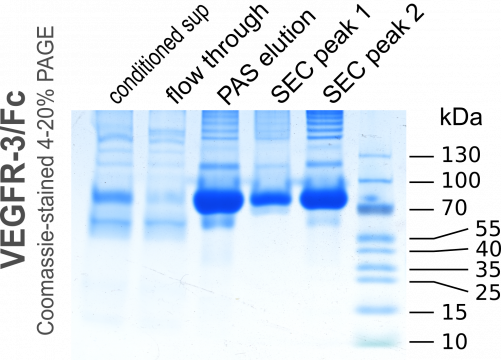 Eight postgraduate students registered for the FPLC protein purification course, which took place in December. If I learned anything, than that protein purification during a course should be done ALWAYS with a protein and a protocol, that has been used before successfully MANY times. Student-provided proteins are a great source for learning, but the time restraints of a course format did not allow us to finish the purification of these proteins during the course.

Technical Problems with the new Äkta Avant 25
In addition, the Äkta Avant 25, that we newly purchased from GE Healthcare this summer, broke TWICE during the course. First the controlling computer broke (RAID failure). HP delivered the replacement drive within 24 hours and after the RAID had rebuilt itself, we could continue the course. However, during the first run after this incident, the Äkta ran into an overpressure problem. We identified a faulty flow restrictor as the cause, but we did not want to continue as we have had severe problems with air bubbles in previous runs. Therefore we performed the runs on the old Äkta Explorer 100. GE Healthcare quickly had their service engineer check out the system, but since he did not have a spare with him, we had to wait until Monday 14.12. until the Äkta Avant was again fully functional.

What we purified: soluble VEGFR-3 (VEGFR-3/Fc) and Hepsin
We did purify soluble human VEGF receptor-3 (the first three domains of its extracellular domain connected to the constant Fc part of human IgG). This is a purification that we have done many times. It is equivalent to the purification of antibodies using Protein A sepharose.
We had prepared in advance conditioned cell culture medium. We produce most of our proteins in insect cells (mostly Drosophila S2) and the VEGFR-3/Fc had been secreted by the S2 cells into the medium after induction of the metallothionein promoter with 1 mM Cu2+ for about 4.5 days. The preparation of the medium for purification consists only of 1) getting rid of the cells by centrifugation and 2) filtration to remove precipitates and other small particles that might clog the column. There is no need to adjust the pH.

Rapid neutralization after low pH elution IS IMPORTANT
We ran the medium over a disposable 5-ml HiTrap recombinant Protein A column over night at about 1ml/min and eluted with a low pH buffer. The eluted 2-ml fractions were immediately neutralized with 400µl 1M Tris pH 8.5. Here we made a small mistake during one of the two purifications. GE Healthcare had not released the casettes for the 5-ml-collection tubes (they still have not done so even though they did promise them already for September 2015) and we used 15-ml Falcon tubes to collect 2-ml fractions, into which we had pre-aliqotted 400 µl of the neutralization solution. However, the mixing in these tubes was not efficient and the prolonged exposure to low pH resulted in a partial damage to our protein. This can be seen when comparing the size exclusion chromatograms of Group 2 versus Group 4: For Group 4 the first peak (aggregated protein) is much larger and more heterogenous compared to the same peak for Group 2.

In fact, when VEGFR-3/Fc is eluted by low pH from protein A columns, it always precipitates at higher concentrations soon after elution, but dissolves again upon neutralization. This did not happen in the fractions 5.A.3 and 5.A.4 (Group 4) due to the inefficient mixing of elutate and neutralization buffer in the 15-ml-Falcon tube (the fraction size of 2 ml was probably to blame as well; 1 ml would have been better). During the run for Group 2, we removed the tubes immediately after the run had ended and thereby mixed the buffers, while for Group 4 the run finished during night time and the eluate remained largely unmixed until the morning.

Alternatively, we could have eluted with a highly concentrated chaotropic salt at near-neutral pH (which we'll do next time in case we have an automated run where the elution happens in the middle of the night). Pierce offers a (proprietary) "gentle" elution buffer of pH 6.6. I don't know the Pierce buffer composiiton, but it is a highly concentrated solution of some chaotropic salt. 3M potassium/sodium thiocyanate or 4M magnesium chloride in buffered solutions around pH 7 are frequently used chaotropic salts for this purpose.

Hepsin
The student-provided proteins were challenging. First, their concentrations in the starting material was very low. While we can see clearly the protein when the VEGFR-3/Fc conditioned medium is run on a PAGE gel and stained with Coomassie, no such band is visible for the Hepsin. In addition, it appeared that a significant fraction of the protein seems not to contain the histag (anymore) and therefore is not captured with the first purification step. The fraction of Hepsin-H6 that does bind to the Ni2+ sepharose elutes already at an imidazole concentration of 20 mM, which makes washing the column challenging. The Hepsin with the longer histag (H10) survives the 20 mM imidazole wash, but it suffers also from low expression levels.

Below are the chromatograms of the individual runs and the annoteded images of the Comassie-stained PAGE gels. The detailed protocol for the operation of the Äkta Avant 25 is still under preparation...