The Staden package on Ubuntu for bioinformatics dinosaurs 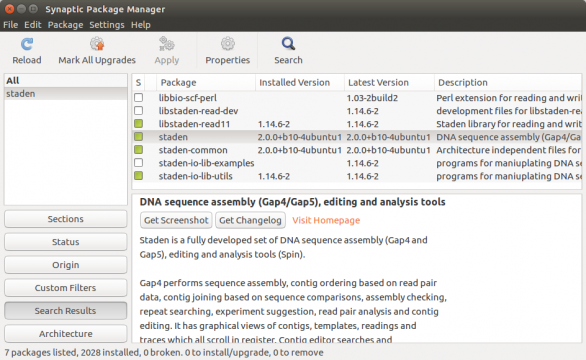 Mostly we use the SnapGene software when we check the sequences of our DNA constructs. However, sometimes SnapGene's alignment view is not flexible enough and then I fall back to using the ancient Staden Package. I just had upgraded from Ubuntu 14.04 to 16.04 and hence did not have Staden installed. I was pleasantly surprised when the installation of Staden took only about 15 seconds because finally - thanks to the Debian Med team - Staden is available from the universe repository (actually already since October 2014).

Staden is clearly not as intuitive as it could be, but it is very powerful and lends itself to automated processing of data. If you have the opportunity to learn it, I would encourage you to do so. The Finnish CSC recorded the Staden course from 2004, in which I participated and you can get the recordings from Funet TV. I just had briefly considered switching from Ubuntu to SuSE because of the ongoing wireless connection debacle that Canonical can't seem to fix, but considering how non-trivial a manual install of Staden is, this is a big plus for Ubuntu. There are obviously dedicated Linux distributions for bioinformatics purposes, but they all tend to lag behind the latest and greatest developments of the major distros.